After 32,000 hits since the site went live in August 2005 we thought it was time we told you something about us and our dogs. We make no apology for the fact that this site is about our dogs, and most of the pictures on it are of our dogs. There are some pictures of other dogs including some we have bred and sold under Dog Friends.  We have also put a link to Bedlington Pictures, Lesley Caines' site, containg hundreds of pictures of Bedlingtons competing at various shows. We hope you enjoy your visit to our site. Judging from the comments in our guest book, and the number of visits we have received we think you will.

We met 1n 1961, got married in 1965 and raised (Dorothy did all the hard work) a family of 3 children - 2 boys and a girl. In 1994 after the boys had left home Dorothy decided she wanted a dog - something of a surprise as neither of us came from doggy backgrounds. However those who know Dorothy know that what Dorothy wants she usually gets, and so Derek "joyously" welcomed Bif, a West Highland White Terrier into the family.

Having just got used to the addition imagine the shock when Dorothy announced in 1995 that the only thing she wanted for her birthday was another dog. After a while Derek came to terms with the idea of another Westie. But no. Dorothy had been out walking Bif when she met a lady walking a delightful dog the likes of which she had never seen before. Completely taken by the dog's personality Dorothy asked what breed it was. The lady said it was a Bedlington Terrier, but didn't look too much like one because her sister was training to be a groomer, and had been practising her poodle cut on the Bedlington. In no way deterred Dorothy was determined to buy a Bedlington. Derek was horrified, and so were the boys although no longer living at home. "This was definitely not a man's dog." Worse still Derek had had some contact with Bedlingtons via work, and had no doubt that Bedlingtons were weird dogs owned by weird people. He was wrong - they are delightful and quickly grow on you. One Bedlington leads to another, because obviously "they need the companionship of  their own kind". Well that's usually the excuse.

The views of the men having been made abundantly clear Dorothy set about finding a Bedlington puppy. Still not easy, but definitely a hard task in 1995 before the internet was a feature of  so many households. Eventually she located a bitch puppy in Scotland and we acquired Bojen Barberton Daisy from the Bojen Kennel of Julie Martindale. We named her Abba, not after the Swedish pop group, because she was bred in Aberdeen. We originally spelt her name as Aber, but eventually gave in to everybody else's belief that the name was spelt as Abba

After a while Dorothy thought she would like to show Abba. First we went to several open shows to see what dog showing was all about and to see if it suited our own temperament. Dorothy thought this would be a great pastime, and made contact with the Breed Clubs. Very soon we were exhibiting at Club and Open shows, and believe it or not at Championship shows. We quickly learned that the only way to compete against more than one or two Bedlingtons was at Club shows or Championship shows. Showing at championship level is not the cheapest of hobbies. It doesn't take long to realise that it is a bizarre pastime with exhibitors travelling all over the country virtually every other weekend, and sometimes in between from March to October to, for the most part, compete against the same dogs. This is inevitable because, although not a rare breed , those that are shown are relatively few in number, and you have to travel to support the breed and the judges. Such is the nature of showing we were told that the average length of time that owners stick with it is only 5 years. We are still going strong so must be well and truly hooked. We are delighted that over the last 10 years there has been an upturn in interest in the breed, and the number of exhibitors now showing has risen significantly.

We soon realised that whilst Abba was a perfect pet with a delightful temperament she was not a good show specimen. We had only bought her as a pet, and showing was an after thought. Abba was the perfect dog on which Dorothy could hone her ringcraft and grooming skills. Abba was later "borrowed" by our youngest son and his wife to see if a dog fitted into their life style. She never came back.She visits occasionally  when she always greets us lovingly, but is more than happy to go home, where she lives a life of extreme comfort with her daughter and grandson. Yes! they now have 3 Bedlingtons.

In 1996 Dorothy set about finding a good quality show dog, preferably a bitch. Encouraged by her friend Maureen Wright, Dorothy contacted Terry Hunter, a regular exhibitor at that time. Sue and Terry Hunter's Jossolli Kennel produced the occasional litter, and Terry had significant success in the ring with his dogs, particularly Ch Jossolli Joe's Girl who was top Bedlington 2 years running. Luck was on our side. Sue and Terry had just had a litter, and agreed to sell us a bitch puppy. We visited, and chose a puppy, the smaller of the 2 bitches in the litter. The other had already been picked by another exhibitor. The puppy's personality was instantly appealing - we learned that Sue had named her Mighty Mo because she was full of beans and always up to mischief. We had to wait another 2 weeks - a fairly tense time in case the other exhibitor changed her mind and chose Mo instead - before we knew for certain she was ours.

The puppy was born in September 1996. In October we had visited friends in Arizona and met an elderly couple known as Dimple and Hay. Dorothy thought Dimple would make an ideal name for a bitch puppy, and so our new addition was named Dimple, her kennel name being Jossolli Juliana. As Dorothy now had the bug badly she decided that she would have her own kennel name, and duly submitted 10 names to the Kennel Club. The affix they approved was Bisbee. It was not our first choice, but there are many reasons the Kennel Club will not approve a name such as somebody else has already registered it or it is too like another affix and can cause confusion.

Although not first choice Bisbee has a ring to it when coupled with the word Bedlingtons. It also coincidentally had something else to commend it. The name comes from the town of Bisbee in Arizona. It is south of Tombstone and fairly close to the Mexican border. We had visited during our time in Arizona, and the name and memory stuck with us. Bisbee is today a centre for artists, but for the better part of 80 years it was a mining town. Not silver as in Tombstone, but copper. The copper deposits were abundant, and Bisbee long outlived Tombstone as a mining centre. This maybe because within the copper deposits were small seams of gold, and the value of the relatively small amounts of gold mined annually was sufficient to fund the copper mining operation for a whole year. So Derek tells folk that the Affix Bisbee is symbolic. The main health problem that can confront Bedlingtons is Copper Toxicosis - see Breed Club sites at the links page for more information. For some years the Clubs supported by breeders have sought with the aid of the Animal Health Trust and the University of Utrecht to develop a DNA test for Copper Toxicosis. A test has now been developed that the Bedlington Health Committee believes will identify the defective gene that is the primary cause of this illness, although there is a possibility that there could be another bad gene. Research work continues, and the Clubs encourage breeders to have their dogs tested, and to adopt a breeding regime designed to ensure that the bad gene is not passed on to puppies. Although the illness is not wide spread within the UK the aim is to eradicate it entirely through correct breeding. So the symbolism is that Bisbee mined copper from the ground for 80 years and Bisbee Bedlingtons are doing their bit to mine it out of the breed. Sounds good even if it was another after thought.

So Jossolli Juliana By Bisbee took to the show ring. Her first Champ show was Birmingham National in 1997 where she was awarded best puppy bitch by Ken Bounden from quite a large class. Ken's critique makes quite interesting reading. Interestingly best puppy dog and Best Puppy in Breed at that show was Dalip Lord of the Rings for whom Ken predicted a great future. Lord of the Rings was soon made up to a champion and went on to take the highest honours both at home and abroad. He is the Bedlington with the second highest number of awards after Ch Vistablu Nelson Touch.

Dimple won her first Challenge Certificate at the Paignton Show 1998 under judge Tom McErlean a well known breed specialst. Her second CC came at WELKS in 1999 under judge Carlos Saevich a breed specialist and a well known international judge. Dimple was made up to a champion at Southern Counties in 1999 under Swedish judge Stig Ahlberg, whose own breed was Airedales. Dimple won another 4 CCs in 1999, and followed in the footsteps of her Kennel Sister Ch Jossolli Joe's Girl by becoming Pedigree Chum/Dog World Top Bedlington that year. Exactly 7 years later in 2006  Dimple's daughter from her final litter, Gypsy, was also made up to a champion at the Southern Counties Show under breed specialist Michael Gent. 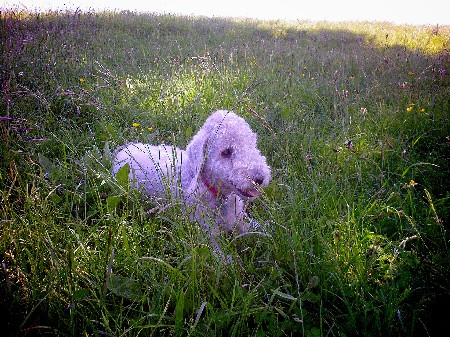